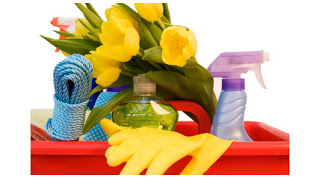 (Part 3 of 3)
Lenten/Spring Cleaning List
At the beginning of Lent, I noticed a few bloggers posted Lenten/Spring Cleaning Lists (like this one and this one). I was indeed inspired but a little intimidated to do something similar. (What if I can’t get it all done? Must be the perfectionist in me =)
Well, I also think there is power in holding yourself (or having others hold you) accountable, so I am going to post my cleaning list …
I know that it is very unlikely that I will get everything done on the days/in the timeframe I have set out to do it. (Being a wife and mother, there are always things—more important things—that arise, and one of my Lenten “goals” is to do this cleaning list, but not be consumed by it so as to neglect my family.) But I will plug away at it between now and Easter and return to it the week after Easter to finish up any tasks that are left …
March 16 Entryway
March 17 Half bathroom
March 18 Laundry room, part 1
March 19 Laundry room, part 2
March 20 DVD/video/CD storage
March 21 Girls’ room/clothes
March 22 SUNDAY
March 23 Playroom
March 24 Family room
March 25 Kitchen, part 1
March 26 Kitchen, part 2
March 27 Bookshelves
March 28 Twins’ room/clothes
March 29 SUNDAY
March 30 Master bedroom closets
March 31 Master bedroom
April 1 Woodwork
April 2 Freezers
April 3 Refrigerator/pantry
April 4 Master bathroom
April 5 SUNDAY
April 6 Windows (indoors, downstairs)
April 7 General clean/sweep porch
April 8 General clean
April 9 Dining area
April 10 GOOD FRIDAY
April 11 Decorate for Easter/Baskets
April 12 EASTER SUNDAY
04/13-17 Celebrate Easter/keep house clean
April 18 Craft cupboard
April 19 Paper, part 1
April 20 Paper, part 2
April 21 Office
April 22 Basement
April 23 Linen closet
April 24 Kids’ bathroom
April 25 Outside windows/deck
Like this post? Please share!